Not only is this pub a grade II* listed building, it is also on the Campaign for Real Ale’s (CAMRA) National Inventory of Pub Interiors of Outstanding Historic Interest and the description is as follows: “For quality and completeness this is one of the finest 1930s pubs anywhere. It was built in 1937 for G A Smith & Sons, wine merchants and off-sales proprietors, whose name is still in evidence, notably on the former off-licence (now a scrap metal dealer's). The architecture makes considerable play of panels of brick alternating with render, and hipped roofs with pantile coverings. The left-hand projection (explained inside) makes the building decidedly asymmetrical. There are two separate bars known as the Oak Room (right) and the Walnut Room (centre) plus the left-hand projection which was called the Music Room – hence the stained glass depicting a variety of instruments and framed by wooden Tuscan columns. The room size can be varied by a folding glazed screen. There is another such screen to the elegant Walnut Room, named for the wood used for the counter (note its distinctive circular decoration) and the high-level screen above. Don’t miss the Art Deco-style mirrors in the bar-back with their wavy decoration. More columns frame the front area. The Oak Room (so-called for obvious reasons) is plainer and played public bar to the Walnut’s saloon. Here the style is ‘brewers’ Tudor’. So we have beams cased in to imitate sturdy timbers, exposed joists, Tudor arches in the servery area and much wall panelling. The counter and bar-back fittings are original but perhaps the most remarkable survivors are the half dozen glass and metal light fittings. In all, this is a truly remarkable survivor which will repay the trek out to see it.”

The listing description is as follows: “Public house, 1937-8. Architect unknown; built for the pub company GA Smith and Dunning. PLAN: U-shaped public areas with central Walnut Bar, adjoining Music Room to the east and separately-accessed Oak Bar to the west. EXTERIOR: two-storey, Neo-Georgian, red brick building with rendered upper storey, modillion eaves cornice, a hipped, pan-tiled roof with sprocketed eaves and tall brick chimneys. To the north the frontage has an advancing central bay with brick quoins, entrance portico leading to the Walnut Bar, iron balconette to the blind first floor window and triangular pediment above. Flanking this are set back wings, that to the west with a large chimney; this has tiled detailing to the brickwork and bears a single surviving original pub sign in timber and iron. To the east is the flat-roofed Music Room which has its own front and side entrances. The second principal façade, to the west, has a projecting central bay and portico leading to the Oak Bar and window with balconette above. The windows are all the original timber mullion and transoms with leaded lights, some with timber shutters. All four entrances retain their original glazed doors and fanlights, some with tile-lined vestibules. INTERIOR: the survival of original features is exceptional. The character of the two main bars, the Walnut and the Oak, is different. The Oak Bar is rustic and neo-Tudor, with encased beams to imitate sturdy timbers, exposed joists, panelled walls and a Tudor-arched fireplace. Above the panelling the plasterwork is roughly textured to give the appearance of rubble walls. The original bar counter survives as does the back bar and servery, all with four-centred arches. A second fireplace is blocked in, although the mantle shelf survives. Banquettes along the walls and some unfixed bench seating additionally appears to be original. There is also a set of glass and metal light fittings, like most of the furnishings in a deliberately rudimentary style. In contrast, the Walnut Bar is neo-Georgian in style and refined in character with a classical fireplace, walnut panelling, and walnut bar counter with square and round panels. The back bar is original too and has slender paired columns and wavy Art Deco detail in the rear mirrors (some covered by later mirrors). There are full-height timber fluted Tuscan columns to either side of the window bays and original radiator covers below the windows. The ceiling beams are moulded. Next to the Walnut Bar is the Music Room, the two separated by a folding partition in walnut and glass with leaded panes. A second folding screen allows the Music Room to be subdivided if required. The Music Room has a stage, proscenium of wooden, fluted, Tuscan columns, walnut panelling, moulded ceiling beams and a set of eight stained glass windows depicting musical instruments. The WCs in the Oak Bar survive, but those in the Walnut Bar are modern; there is also a modern disabled WC in the vestibule of one of the Music Room's two separate entrances. The non-public areas are plainer, with simple finishes and joinery, but well-preserved. Floor surfaces are either wood block or quarry tiles. The stair survives and there are a number of upstairs rooms containing three original fireplaces in Art-Deco designs and bathrooms complete with cream and black tiles. HISTORY: The Eastbrook was built in 1937-8 for the pub company GA Smith and Dunning who were the first licensees. It was an 'improved' public house, serving the rapidly expanding suburbs of Dagenham. Such establishments, built in great numbers between the wars, rejected the flamboyant architecture, brilliant décor and small bar layout of the late Victorian 'gin palaces'. Instead they aimed to encourage sensible drinking and to attract respectable customers with vernacular or Neo-Georgian exteriors and an open plan interior, with large windows and tasteful décor. Many included a restaurant, billiards room or function room in order to encourage activities other than just drinking to take place inside. Those improved public houses situated close to major roads sometimes had accommodation for travellers available too, as the Eastbrook appears to have done in its upper rooms. REASONS FOR DESIGNATION: The Eastbrook public house is designated at Grade II* for the following principal reasons: * architecture: smart Neo-Georgian exterior with good detailing and materials; * design quality: contrasting aesthetic in the Oak and Walnut Bars, which epitomises the pluralistic approach to design in the inter-war years, and nostalgia for 'Merrie England'; * planning: an archetypal inter-war improved road house with a range of rooms for different functions and clientele; * intactness: virtually unaltered, high-quality interior complete with walnut or oak panelling, glazed partitions, bars, seating, stained glass, and fireplaces * suburban landmark: the pub exemplifies inter-war arterial development.”

This pub is the official lunch stop.

The Eastbrook featured on the Daytime Crawl of SW Essex and E London in June 2006, and the Oriental Splendour: Daytime Tour of Dagenham and East Ham in October 2021. 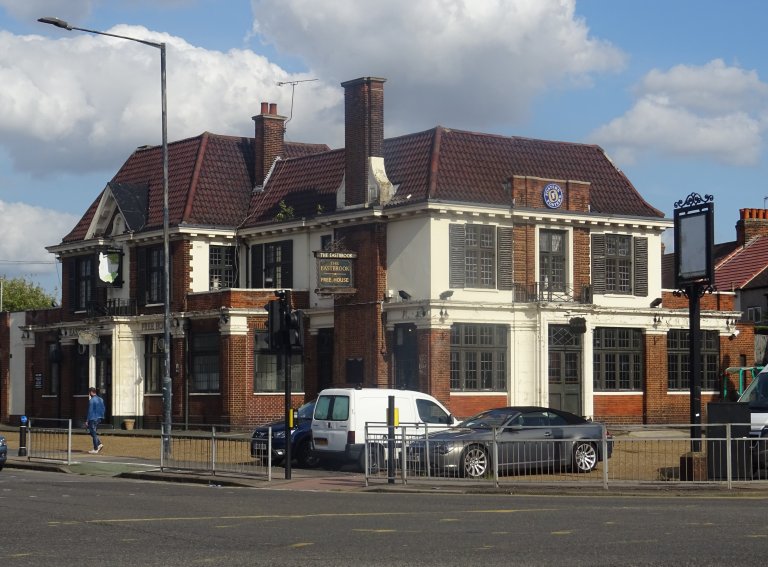 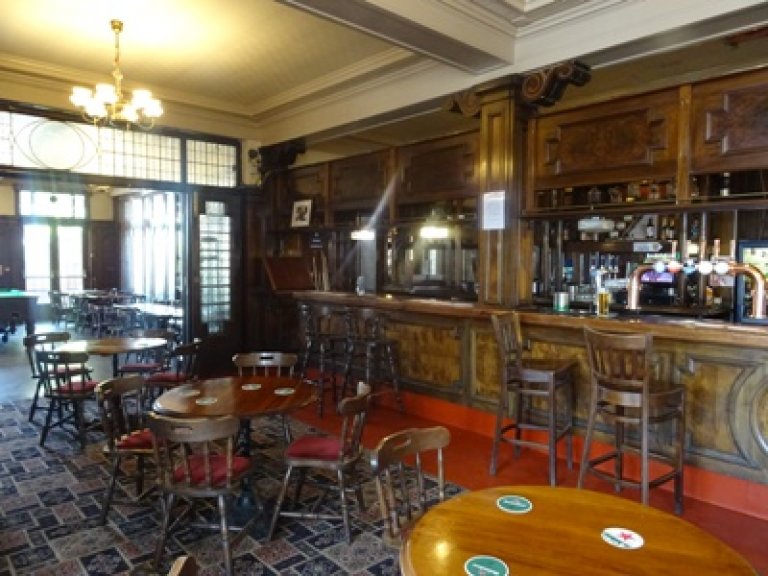 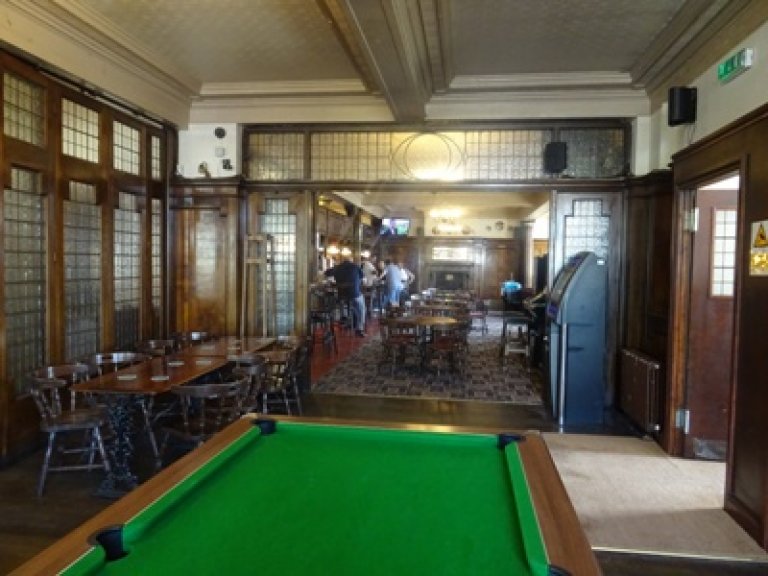 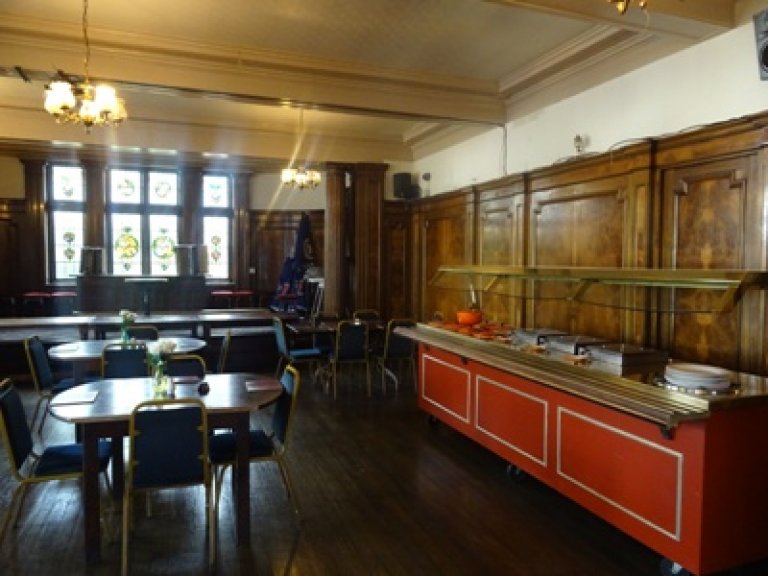