Although this pub is not a listed building, it has quite a story to tell. It was built in 1921 and was mostly demolished (illegally) on 8 April 2015. This was the day before the pub was to be included on the statutory list at grade II. The owners were prosecuted and ordered to rebuild the pub ‘brick by brick’. Six years later (almost to the day) on 12 April 2021 the rebuilt pub reopened, 100 years after it was originally built. Before it was largely demolished the Carlton Tavern was on the Campaign for Real Ale’s (CAMRA) London Regional Inventory of Pub Interiors of Special Historic Interest and the description was as follows: “This attractive inter-war pub is still very much a community local in what is now a sea of drab post-war housing. The ceramic advertising fascias leave no doubt as to who built it – the major East End brewers, Charrington’s. Look out for the unusual sign down the side – ‘Carlton Luncheon and Tea Room’. The original layout is still very apparent with a large public bar on the right, a smaller, better-class saloon on the left with the single-storey ‘luncheon and tea room’ still intact behind. Each room retains its original counter and back fittings although, sadly, those in the public bar seem to have been subjected to a varnish stripper with dire results. As usual with inter-war pub fittings the details are restrained. A really attractive feature of the pub is the ceiling in the left-hand bar with its plaster foliage friezes and other decoration, now picked out in red and gold. There is similar decoration on a more modest scale in the luncheon room. Sadly most of the original window glass has been replaced.

History nearby: St Augustine’s church (1870-7) is the architectural masterpiece in this area. This is one of the very greatest churches built during the Victorian Gothic revival and its architect, J L Pearson, designed Truro Cathedral (1880), Cornwall.”

This pub’s ‘R’ category is ‘Rebuilt’ for reasons mentioned above.

The Carlton Tavern featured on the Daytime Crawl of NW London and Maida Vale in October 2006, and features on the The Three Rs - Rebuilt, Revived and Restored: Evening Tour of Kilburn and Hampstead on 8 December 2021. 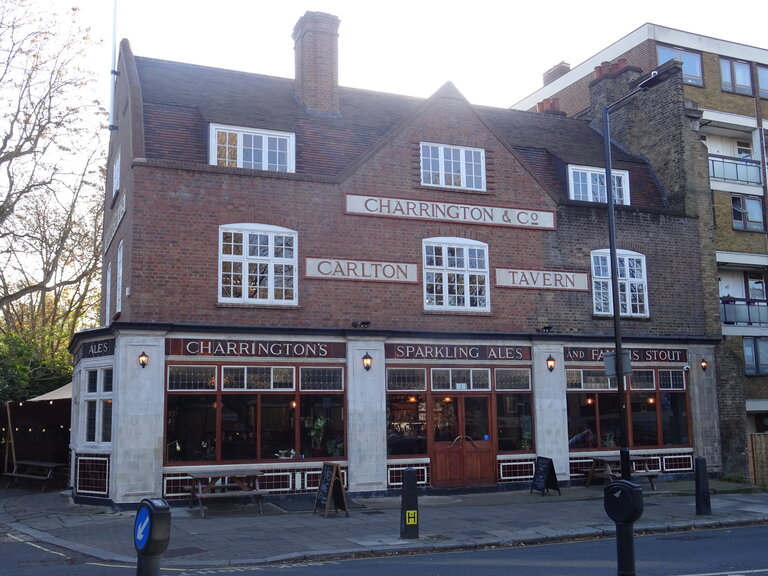